This content was published: January 17, 2011. Phone numbers, email addresses, and other information may have changed.

The Southeast Portland resident had been a Fancy Dancer for past powwow grand entries along with her father, who is a Men’s Traditional dancer. Now, she will join her friends with the United Tribes Club (a student club with the campus’ student government) to organize this year’s 12th powwow at the Sylvania Campus on Saturday, Jan. 22. 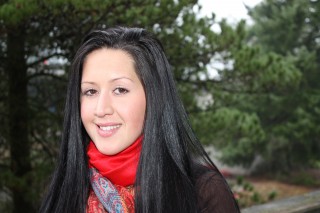 Jamie Carline is a dancer and volunteer for the PCC powwow.

“The powwow brings together many of the tribes throughout the Pacific Northwest,” Carline said. “You get to see who goes to school here, who is in your community, and all the different kinds of dancing. It’s a great place for us to give respect to our volunteers and elders. It’s also an important time for kids and families, providing an opportunity to pass on traditions to our youth.”

Carline, 28, is a student coordinator in the Multicultural Center and a powwow volunteer. She will assist with making sure the event runs smoothly and help her family, who are cooking the community dinner featuring buffalo stew and fry bread to be served at 5:30 p.m. In addition, they will operate a food booth during the event to help raise funds for the Native American Scholarship program at the PCC Foundation.

“This is a major thing for me,” Carline said. “It’s really awesome to be involved in the club, the Multicultural Center and this community event. The powwow is known throughout the Native American community and the Portland area.”

As a 9 year old, Carline attended the powwow with her father and even performed with Rattling Thunder and other schools in the College Center Building for educational performances on Native American history.

“I believe that being involved in the powwow is important because it’s one of the many ways we pass on traditions, meet who is in our community, visit with old friends, make new friends, and be involved on campus,” she said. “When I had the opportunity to help with this year’s powwow, I jumped at it. It has been nice to see so many students eager to get involved and do some volunteer work, along with my family for this event.”

Besides being involved with Native American activities on campus, Carline is pursuing her transfer degree and plans to enroll at Portland State University this coming fall to start her Tribal Law education. She still dances although she said she’d like to move her focus from Fancy Dance (uses a shawl to form an appearance of a butterfly and is fluid with intricate steps) to Jingle Dress Dancing. This prayer dance is where the performer makes the dress over the course of a year. The process involves the dancer making one prayer cone each day and then added to the garment for an eventual total of 365 cones that jingle when they dance.

Want to know more about Native American culture and happenings? The United Tribes Club welcomes all students. It meets at 10 a.m., every Friday in the Pine Room, Sylvania Campus.