This content was published: November 9, 2009. Phone numbers, email addresses, and other information may have changed.

What would you do if you went to another country, with maybe an unsure grasp of the local language and tried to go to school for a few years? Would it be daunting? Intimidating? That’s exactly how many international students feel when they first get to the United States to go to school. 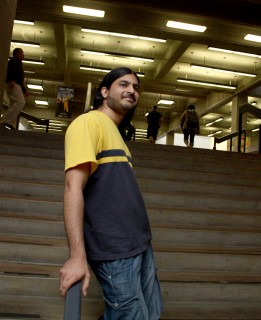 Kabir Khanna, who hails from New Delhi, India, has made the adjustment to life in the United States and now is helping others like him do the same.

An event at PCC is trying to make that transition smoother and easier for the college’s growing international student population. In conjunction with a national push to honor study-abroad programs, Portland Community College will host its seventh annual International Education Week Nov. 16-20. It is open to the public.

“The language barrier is the most difficult to overcome,” he added. “It’s a real challenge for the first few years and makes it harder to overcome other challenges like the social and cultural ones. It’s not always easy to do. And the students have a lot at stake when they are getting an education here.”

Khanna understands the challenges that face students like him. In 2003, he first arrived in the U.S. to complete his bachelor’s degree in computer science at the University of Missouri at Kansas City. He graduated in 2006, but wanted to change direction in life and enrolled at PCC to focus on a degree in the humanities. This is his second term at the college.

“What attracted me to PCC is that it’s a large community college and it offers a pretty diverse set of classes and range of fields,” he said. “Portland is a city I wanted to move to and I feel like I fit well into the culture of the city.”

Khanna may feel he fits in, but his cohorts in the International Education program often struggle to understand the language and culture. That’s why he’s so involved with organizing International Education Week’s celebration dinner at 6 p.m., Thursday, Nov. 19, Events Center, Building 9, Rock Creek Campus. It will honor the F-1 Visa international students attending PCC with ethnic foods, various performances from local bands and artists, a fashion show by the international students, and a raffle of prizes. 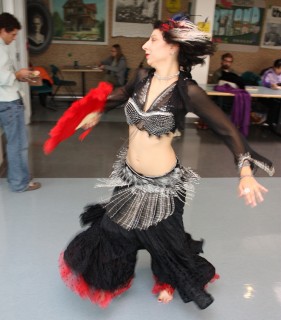 A Middle Eastern dancer entertains the lunch time crowd at the Cascade Campus during the 2008 International Education Week.

These events, free to the public, help educate the public to the wide variety of countries and cultures represented at PCC.

“It plays a huge role in getting the community in touch with what’s important out there in the world,” Khanna added. “Being from India, I have world views that are slightly different from typical Portland natives and I’m sure that’s the case with other international students as well. In celebrating diversity we embrace our unique perspectives on the world.”

A vegan who loves to ride his motorcycle, Khanna fits right into the Portland scene. But he’s never disconnected from family thanks to cheap calling rates and services on the Internet and seems at ease being on the opposite side of the planet from his home country.