Jim Leisy (1950 -2014) was a photographer and publisher.  He studied history and art at Bethel College (Kansas) after which he became a photographer for the University of Chicago Press and contributed to the Chicago Review.  In 1974, he became field representative and editor for Addison-Wesley Publishing Company (Reading, MA), based in Philadelphia. He joined Brooks Cole Publishing Company (Monterey, CA) as chemistry and computer science editor in 1977. In 1985, he founded Franklin Beedle & Associates to publish computer science texts. When, in 1990, he decided to relocate the company to Portland, OR, the entire staff followed him.  His imprint published noted textbooks books in computer science and programming.

In addition to his work in solar printing, Leisy also is known for his portraits of working men and landscapes of the Northwest.  Many of his images of musicians taken at Chamber Music Northwest concerts appeared in The Oregonian. His photographs are in private collections as well as the Portland Art Museum and the Houston Fine Arts Museum.  The artist is the recipient of a 2014 Caldera, Caldera Gold Spot Award. 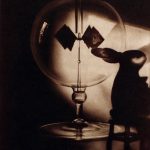