Jeri Hise is a painter and printmaker noted for her high illusionism.  She received her BFA from Smith College, where she later taught printmaking, before moving to Tribeca (NY) where she kept a studio and taught privately.  She was a founder of Inkling (1981-2008), a cooperative printmaking studio in Portland, where many noted printmakers worked.  Hise was married to the artist George Green (1943-2020) with whom she regularly collaborated on work.  She was included in “Visual Magic” a survey of Northwest illusionistic painting at the Jordan Schnitzer Museum of Art (Salem).  She has also exhibited in Portland at PDX Contemporary Art.  She serves as Executive Director of the George Green Art Institute. 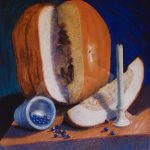