William P. Galen (1925 – 2020) was born in Portland and purchased his first camera at age 12 from Fred Meyer for 39 cents, sparking a passion for photography that remained with him throughout his life. As a student at Lincoln High School where he served as photographer for the student paper and yearbook, he met Beverly Weiner, his favorite photographic subject and future wife. After graduating from the University of Oregon Medical School (now OHSU), he became a highly respected physician and one of the first Oncologists in Oregon. He studied photography with Minor White and hosted many internationally known photographers as a longtime member of the Photographer’s Interim Workshop. In 1970 he founded the Camerawork Gallery (now housed at Emanual Hospital) and continued to serve as its director until 2004. His friendships with many artists such as Imogen Cunnigham, Judy Dater, Jean Moment, LaVerne Krause and especially Frederic Littman are documented in his portrait photographs of them, many in the collection of the Portland Art Museum. In addition to his photographic work, Galen and his wife were longtime patron of the arts, supporting many music, theater, and art institutions in Portland. 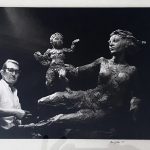 Portrait of Frederic Littman with Mother and Child 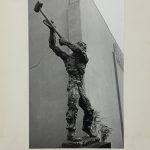