Born in 1945 in Amarillo, Texas, Potter Tom Coleman received his BFA in ceramics from the Pacific Northwest College of Art (formerly the Museum Art School) and at Reed College. He has run his own pottery studios in Canby (OR), Las Vegas and Henderson (NA).  Coleman taught ceramics at the Pacific Northwest College of Art as well as Portland State University and the University of Nevada (Las Vegas).  In addition to his teaching career, Coleman has delivered lecturers and workshops all over the globe, from Pensacola, FL to Huntington Beach, California to Columbus Ohio and Middleton Connecticut to Houston, Texas to Melbourne, Australia. In 1983, Coleman began a fruitful collaboration with Frank Boyden (whose work in sculpture and etching is also in the Rock Creek Collection), throwing the pots that Boyden would then decorate with his incised drawings. After three years of collaborative work at the East Creek Anagama kiln in Oregon (which he helped build), Coleman moved to the desert where he continues to work with wife Elaine out of their studio and gallery in Henderson, Nevada.

Tom Coleman has had an extensive exhibition career at numerous galleries through the US and Canada as well as Denmark, Australia and Holland. He has also published many articles on ceramics, as well as been included in many articles and survey books such as 500 Cups, Ceramic Explorations of Utility & Grace (Lark Books), Making Marks, Discovering  The Ceramic Surface by Robin Hopper, Contemporary Porcelain by Peter Lane and The Craft and the Art of Clay by Susan Peterson. His work is in numerous private and public collections including the Canton Museum of Art (OH), The State of Colorado Permanent Collection (Steamboat Springs), The Smithsonian Institute, American Art Museum (Washington, DC), Long Beach Art Museum (CA), Grimmerhus Museum (Fyn, Denmark), American Museum of Ceramic Art (Pomona, CA), San Angelo Museum of Art (TX), Wooster College Art Museum (OH). Locally, his work is in the collection of Kaiser Hospital and the Portland Museum of Art.

In October- November 2015 Tom Coleman was invited to Rock Creek Campus to conduct a workshop in conjunction with an exhibition of his new work in the Helzer Gallery. 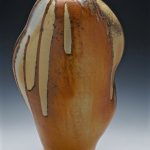 Porcelain thrown with two different shino glazes, one poured over the other 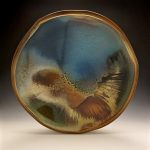