Romare Howard Bearden (1911- 1988) is recognized as one of the most creative and original visual artists of the twentieth century. He experimented with many different mediums and artistic styles, but is best known for his richly textured collages.

Bearden began college at Lincoln University, transferred to Boston University and completed his studies at New York University (NYU), graduating with a degree in education. While at NYU, Bearden took extensive courses in art, supplementing these later with study at the Art Students League in New York and the Sorbonne in Paris. Gathering inspiration from Western masters ranging from Duccio, Giotto, and de Hooch to Cezanne, Picasso and Matisse, as well as from African art, Byzantine mosaics, Japanese prints and Chinese landscape paintings, Bearden created a unique style imbued with visual metaphors from his past in Mecklenburg County (North Carolina), Pittsburgh and Harlem and from a variety of historical, literary and musical sources.

From the mid-1930s through 1960s, Bearden was a social worker with the New York City Department of Social Services, working on his art at night and on weekends. Among his many friends, Bearden had close associations with such distinguished artists, intellectuals and musicians as James Baldwin, Stuart Davis, Duke Ellington, Langston Hughes, Ralph Ellison, Joan Miró, George Grosz, Alvin Ailey and Jacob Lawrence.

Bearden was also a respected writer and an eloquent spokesman on artistic and social issues of the day. Active in many arts organizations, in 1964 Bearden was appointed the first art director of the newly established Harlem Cultural Council, a prominent African-American advocacy group. Bearden was also one of the founding members of the Black Academy of Arts and Letters in 1970 and was elected to the National Institute of Arts and Letters in 1972. 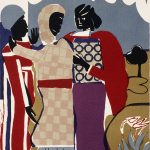