For over 40 years, Robert Bibler (b. 1948) has combined a fascination with cinematic storytelling, classic filmmaking, and Renaissance art to create a body of beautifully rendered and thoughtful work.  A master draftsman, Bibler embraces figurative representation and symbolism in his surreal, narrative works that distort space and time.

Bibler lives in Salem, Oregon and taught studio art and film studies at Chemeketa Community College for 30 years, retiring in 2003.  He also helped to bring classic and contemporary films to the Salem public for 40 years as Coordinator of the Wednesday Evening Film Series.  Bibler has exhibited extensively in the Pacific Northwest and his work is included in public and private collections throughout the region.  He earned his BFA from the University of Washington and his MFA from University of Massachusetts, Amherst.

“My work has been influenced more by film directors ––Fritz Lang, Bernardo Bertolucci, Josef von Sternberg, Andrei Tarkovsky, to name only a few–– than by any other group of artists.  I enjoy works of art that attempt the kind of complex visual associations that the best films can achieve.  The implicit narrative potential in the juxtaposition of images is rooted in the mechanisms of the mind, and film editing strategies have influenced me a great deal….  I especially enjoy the artificial world of classical cinema (and Renaissance paintings)––self-enclosed, highly structured, and potentially abundant in meaning.” 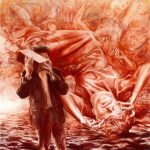 Camera Obscura (The Myth of the Cave) #1