Nelson Sandgren (1917-2006) was a painter and printmaker. Born in Manitoba, Canada, he grew up in Chicago until the family relocated to Portland when he was a teenager. He received his BA in 1943 from the University of Oregon. After serving in the Army he returned to the U of O where he studied painting with Jack Wilkinson, Andrew Vincent and David McCosh, completing his MFA in 1948. In 1947 – 1948, Nelson studied with Mexican muralist Alfredo Zalce, in Morelia, Michoacan, which sparked his interest in mural painting.

In 1948 Sandgren joined the art faculty at Oregon State University (Corvallis) where he was inspired by his colleagues Gordon Gilkey and John Rock to learn printmaking. Sandgren remained at OSU teaching painting and printmaking untill his retirement in 1986.

Sandgren’s work combines a love of Northwest landscape with the Modernist influences of Marsden Hartley and John Marin.  Sandgren’s murals include those painted for the Lane County Courthouse (1959) and the Mahlon Sweet Airport (1989) in Eugene. His paintings and prints are in numerous collections such as The Portland Art Museum, Hallie Ford Museum, the Coos Art Museum, Oregon State University and the Victoria and Albert Museum. 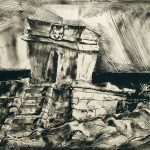 Temple of the Divining God – Tulum 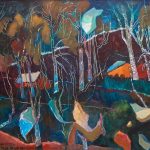 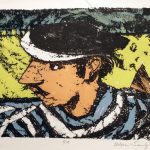