Michael Brophy was a business student at the University of Oregon when a semester abroad in London brought him face to face with the great Velasquez and Francis Bacon paintings in the National Gallery and his life path changed: “It just called me. It was like the old romantic notion of a calling.”  He enrolled in the Pacific Northwest College of Art where he was classmates with Erik Stotik and a student of Lucinda Parker and Harry Widman, all artists with multiple works in the Rock Creek art collection.  After graduating in 1985, Brophy worked at Powell’s Books and painted in an old storefront converted to a studio. Although his parents wanted him to pursue more traditional careers such as a graphic designer or architect, Brophy’s love of oil painting— often on a grand scale— triumphed in the end.  He has come to be one of the most respected painters in the Northwest and was honored with a retrospective exhibit at the Tacoma Art Museum and Hallie Ford Museum in 2006.  Michael Brophy is represented by Russo Lee Gallery (Portland). His paintings can be found in many collections including Microsoft, the Multnomah County Library Collection, the Portland Art Museum, the Seattle Art Museum, the Tacoma Art Museum, OSU Library in Corvallis, the City of Portland, and the Coos Art Museum. Public commissions include Portland’s City Hall, the Columbia Gorge Discovery Center in Wasco, OR, and Mt. Rainier High School in Des Moines, WA. 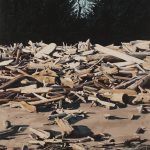 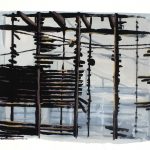