Originally from Brooklyn, New York, Mel Katz (1932- ) graduated from the Cooper Union Art School in 1953. He moved to Portland in 1963 and became well known in the early 1970s as one of the founders of the nationally known Portland Center for the Visual Arts (PCVA) which collaborated with an impressive roster of artists including Carl Andre, Donald Judd, Sol LeWitt, Frank Stella and Robert Irwin.  Katz taught art at Portland State University until retiring in 1998. He has been exhibiting his work since 1956, which includes a solo show at the Hallie Ford Museum, in Salem, OR in 2006, a retrospective at the Portland Art Museum in 1988 and the highly acclaimed traveling exhibition Still Working, in 1994. Selected collections include; the Portland Art Museum, OR; Seattle Art Museum, WA; Tacoma Art Museum, WA; City of Seattle; Oregon Health Sciences University, Portland; Good Samaritan Hospital, Portland, OR; and Safeco Insurance, Seattle, WA. In 2013, he completed a commission for Jefferson Elementary,  Everett, WA, through the Washington State Arts Commission. A career retrospective was organized by the Hallie Ford Museum of Art in Salem, Oregon in 2015. 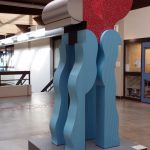 Confetti Stripes and Aluminum Too