Born in New York in 1923, Louis Finkelstein studied painting at Cooper Union, The Art Students’ League and Brooklyn Museum of Art. His paintings have been shown at Yale University, New York Studio School, Riverside Museum, Whitney Museum of American Art, Corcoran Gallery and the Pennsylvania Academy. His work is in several institutional collections, including those of the National Academy of Design (NY), the Butler Art Institute (OH)  and the Hood Museum, Dartmouth College (VT).  As a critic, Finkelstein wrote for Artnews and the College Art Journal. As a teacher, Finkelstein was a much respected and loved educator, as well as a spirited and articulate speaker. He taught at the Philadelphia College of Art, Yale School of Art (he served as interim dean of the Art School from 1962-64), and was head of the art department at Queens College, CUNY for more than twenty-five years. In 1979, he received the College Art Association’s award for distinguished teaching and in 1999, was awarded an honorary doctorate in the fine arts from Maryland Institute College of Art. Finkelstein received several Fulbright grants, an NEA for painting, and was a member of the National Academy of Design. He was married to the artist Gretna Campbell, and after her death, to the artist Jane Culp.  Finkelstein died in 2000.

Martika Sawin in her essay on Finkelstein’s late pastels wrote: “Finkelstein’s art emerged at the juncture of highly informed cerebral activity and a direct response to the world of appearances. He reiterated the importance of sensation or the subjective element as the source of the poetry that gave the work of art its ultimate value, but he rarely strayed far from the notion of art as an intellectual pursuit. ‘I think painting is itself a kind of teaching, and in the modern situation, its own kind of liberal art, like literature or philosophy.’” 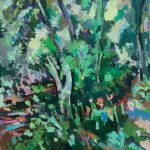 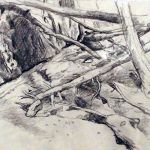