Ken Kewley was born in 1953 in Battle Creek, MI. Although he received his BFA in Painting from the University of California at Santa Barbara, (College of Creative Studies), his job as a museum guard at the Metropolitan Museum of Art in New York may have served him as the best form of graduate study.  Kewley has had solo exhibitions of his paintings at Rothschild Fine Art (Tel Aviv), The Jerusalem Studio School (Jerusalem), Lafayette College, (Easton, PA), Lori Bookstein Fine Art (New York), Barton-Ryan Gallery (Boston, MA), Scott White Gallery (La Jolla, CA), Hackett/Freedman Gallery (San Francisco, CA), and Carson Street Gallery (Pittsburgh, PA).  Kewley has served on the faculty of The Jerusalem Studio School (Coricano, Italy and Jerusalem), and the Pennsylvania Academy of Fine Arts.  His work is in numerous private collections as well as the San Francisco Arts Commission, Exxon Corporation, and Yosemite National Parks Museum.

Ken Kewley visited Rock Creek Campus in 2015 as a guest artist (generously funded by a grant from ASPCC).  While on campus Kewley gave a memorable artist‘s talk, exhibited some 18 new paintings and collages in the Helzer Gallery (including Blue Nude), and ran a two-day workshop for Rock Creek Art faculty, in which he shared his integrated approach to teaching drawing, painting and sculpture as a series of analyses of planar and spatial problems.  Many of these approaches have since found their way into Rock Creek’s art curriculum.  Kewley’s highly original approach to generating diverse investigations into the same subject matter using collage, drawing, painting, sculpting (in cardboard and tape) and multiple variations (using a digital scanner/printer as a shortcut) have made his workshops legendary across the country.

He writes:  “I tend to like paintings where the abstraction is strong. By this I mean that the paint, the colors and shapes are distinct, like strong actors in a play. Going towards abstraction does not mean going away from representation. It is more like describing something real by other means than illustration. Art is not something that is learned and then practiced; it is a form of communication where one is always trying to say something clearer. To love and to be honest: maybe one does not exist without the other and a desire to communicate that… is what it takes to make art.” 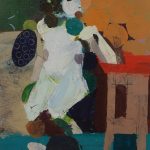 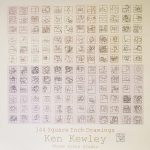