Judy Biesanz attended the New York Studio School in 1999, and earned her Bachelor of Fine Arts from Pacific Northwest College of Art in 2000. She lives and works in Portland, Oregon. She has exhibited in group shows at Printmakers Northwest, Bush Barn Gallery (Salem) and has had solo shows at Guardino Gallery and Beam and Anchor (Portland). Her work in oil on canvas or panel has included a series of self-portraits, portraits of friends and family, and most recently a series of large paintings of bathers called “Lost and Found.” Biesanz’s work celebrates a love of the material oil paint and of the muscular gesture of a brushstroke. Much of her work conveys the quality of a fleeting moment mysteriously resonant of meaning. The directness of her painting owes something to the Bay Area Figurative painters such as Elmer Bischoff and David Park and figurative artists of the New York School such as Rosmarie Beck. 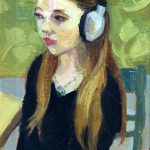