Jason Berger (1924-2010) was a painter of plein air landscapes and abstracted studio versions of the same motifs.  A talented jazz musician who played alto sax in the style of Lester Young, Berger possessed a lively mind that could express itself equally in elegant paintings, inspired solo riffs on old standard tunes, as well as dreadful puns.  Born into a Jewish family in Malden, Massachusetts, Berger’s first language until age three was Yiddish.  Inspired by an uncle who was a commercial illustrator, he attended vocational art classes at the Museum of Fine Art in Boston in high school and then was awarded a full scholarship to study at the Museum School of Boston.  His teacher Karl Zerbe, a refugee from Nazi Germany, introduced Berger to European painting and the great Expressionist painters Max Beckmann and Oscar Kokoschka, who visited the School. During the Second World War, Berger served in the American Army in France. After the war he graduated with a travel scholarship to Paris where he studied with the Russian sculptor Osip Zadkine on VA education benefits, met Henri Matisse, Alberto Giacometti and frequented the studio of Georges Braque.

When he returned to the states, he joined the faculty of Wellesley College, the Boston Museum School, and finally, the Art Institute of Boston, where he taught until 1988, taking paintings trips to Mexico, France, Ireland, Portugal and Holland during his summer vacations.
Although initially connected with the Boston Expressionists Jack Levine and Hyman Bloom, whose moody and painterly works reflected existential or political issues of the postwar period, Berger’s work was always lighter, brighter and more playful, expressing the joy of being alive.  In the early 1970’s he and his wife, the painter Marilyn Powers, founded the Direct Vision group of painters, who exhibited regularly in group shows in the Boston area and were dedicated to a fresh and spontaneous approach to painting from life.  Powers said of their work:  “The academy is making products for the establishment. We are trying to touch people’s hearts.”  Although a stroke in 2002 somewhat slowed his puns, he continued to paint with even greater vivacity and confidence right up until his death.
Berger exhibited in museums and galleries in New York, Boston, Santa Fe as well as in France, Mexico, Sweden and Portugal. Berger’s work can be found in numerous private collections, as well as in the permanent collections of the Chase National Bank (New York), Danforth Museum of Art (Framingham, MA), Guggenheim Museum (New York), Museum of Modern Art (New York), Rockefeller Medical Center (New York) Rose Art Museum, Brandeis University (Waltham, MA) and Smith College Museum of Art (Northampton, MA).
Berger was the teacher of two artists in the Rock Creek Collection: Mark Andres and Thomas Barron. 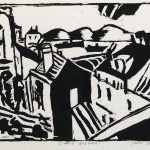 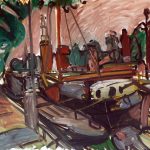