Jan Baross (1943-) is a filmmaker, writer and visual artist. She has made over 40 documentaries and has taught filmmaking at Oregon State University. Her award-winning films have aired on A&E and OPB. Her novel, “Jose Builds a Woman” won first place for fiction in the national Kay Snow Awards. She adapted her play, “Mata Hari” into the libretto for an opera which premiered at the Deep Ellum Opera Theater in Dallas, Texas. She has been a freelance film critic, travel and feature contributor for several newspapers and magazines in the US and Mexico.  She received her BA in art from San Francisco State University and her MA in media communications from Oregon State University. She attended studio art classes at PCC Rock Creek. 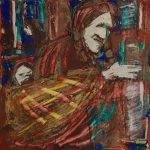