Hernandez graduated with both MFA and BFA in painting from the University of Oregon in 1999 and 1996 respectively.  He also holds an MA in Interdisciplinary Studies in Art & Education from OSU.  He was a Monbusho Scholar in Japanese Painting (Sophia University, Japan) and in Japanese Culture and Language Studies (Osaka University of Foreign Languages, Japan).  He also holds a BA in Social Anthropology from the Universidad Autónoma Metropolitana (Mexico City).   He is currently on the faculty for Chicano/Latino Studies at Portland State University. 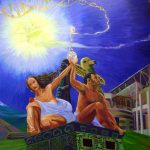