Fredrick Heidel was born in Corvallis, Oregon, in 1915, and died in Portland in 2000. He received his Master’s in Fine Art from the Art Institute of Chicago in 1956. He taught art for over 35 years, beginning in 1945 at the Biarritz American University and then at Portland State University from 1951-1980. He was known primarily as a painter but also worked in glass sculpture after studying glass fusing at various factories in Holland on a traveling grant. He had solo shows at San Francisco Museum of Art, The Portland Art Museum, and was represented by Smith Anderson Gallery (Paulo Alto) and Glasgalerie Kuhler (Amsterdam). His estate is represented by Russo Lee Gallery. His work is in the collections of the Portland Art Museum, Coos Art Museum and the U of O. 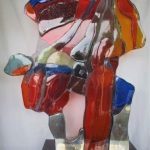