Fred Schwab was born in 1936 in Portland and attended Grant High School where he distinguished himself as an adequate band trumpet player and a particularly talented art student;  the quality of his portfolio earned him a full scholarship to attend the prestigious Pratt Institute (Brooklyn).  After he earned his BFA from Pratt he attempted to continue in the graduate program, but his connections to the jazz scene in New York as a bass player brought him into the sphere of many jazz giants such as Miles Davis and John Coltrane, leading him to abandon his art studies. Unfortunately this period was also the beginning of an addiction to heroin with which Schwab struggled for the remainder of his life.

After placing himself into a detox program in San Francisco, Schwab enrolled in the graduate program at Humboldt University (Arcata, CA) where he earned his MFA in printmaking. Most of the work he produced during these years consisted of a series of monotypes, a form of printmaking in which images are drawn directly onto flat plexiglass or copper plates without the use of chemicals.  Instead the plate is covered with ink and then wiped selectively to achieve both additive and subtractive effects.  Schwab developed a particularly complex technique for monotypes, using translucent multiple layers of inks (sometimes up to 15 layers or more each printed separately) to create delicate atmospheric and painterly effects. Often these images were landscapes seen in late afternoon or early evening light.

These unique works, so often filled with a sense of poignant yearning for calm and tranquility, were the opposite of the artist’s day to day struggles with relapses and ever increasing health problems. The brother of Rock Creek ceramics teacher Wally Schwab, Fred Schwab came to the campus in 1992 for an exhibition of monotypes in the campus gallery, where he projected the confidence of an artist at the height of his skills. The truth was another matter.  His soul was wrestling with itself and the art he made during this period was an attempt to work through these issues.  Fred Schwab died in 2008 after burning many bridges and experiencing ever increasing health crises. The chaotic nature of his life kept him from ever establishing himself as an artist, but now one can see what talent was there: a poet of the dark night of the soul. Here is a man at odds with himself whose deep love of nature and of music and whose courage to continue to transform himself may prove an inspiration to a whole generation who never knew him. 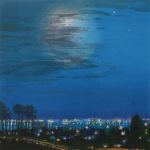 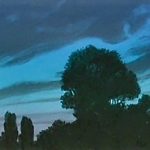 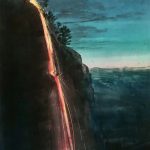 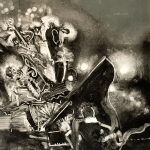 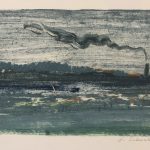 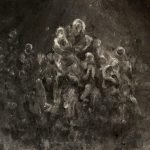 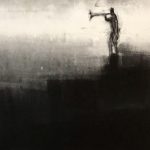 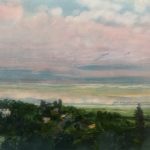 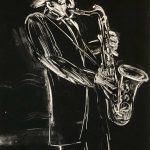 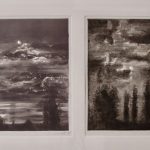