Charles Bryan Ryan (1909- 2001) was born in Fort Jones, California. He attended the University of Oregon, where he earned bachelor and master of fine arts degrees, graduating in 1939.  During World War II, Ryan served in the United States Army, assigned to the Tenth Mountain Division from 1942-1946, the so-called “Ski Troops.”  In 1945 he served as an instructor of art in Florence, where he led soldiers on tours of the local churches and lectured on the paintings, sculptures and architecture of Italy.  Ryan returned to Oregon in 1946 and joined the staff at the University of Oregon where he taught classes in painting, watercolor, drawing, basic design, composition and visual theory until his retirement in 1974.  Ryan had a one-man show of paintings at the Portland Art Museum in 1954.  He exhibited regularly in group shows over the next 12 years at the Portland Art Museum as well as the University of Oregon, Oregon State, the Banff School of Fine Arts (Alberta) and the College of the Siskiyous (CA).

Ryan’s retirement was not only from the university but also from being a working artist.  An avid alpine skier since his days in the Ski Troops,  Ryan moved to Tumalo in 1974 where he could be close to Mt. Bachelor and live in retirement with his wife, Rhoda.  He seems to have never painted or made art for the last 25 years of his life.  His name slowly disappeared from the history of Northwest Art until 2003, when Rhoda Ryan, who was downsizing to move into an assisted living facility, brought her husband’s work to the attention of Sandra Miller, owner of the Sunbird Gallery in Bend.  Miller had the work inventoried and cleaned, and curated a retrospective exhibition at the Pickney Center For the Arts at Central Oregon Community College, which travelled to the Coos Art Museum and to the Bend Public Library.  Bill Rhoades has been instrumental in placing Ryan’s work in several public collections and preserving Ryan’s legacy.

One of Ryan’s most interesting connections was with Buckminister Fuller,  inventor of the geodesic dome, whom Ryan met through the U of O and who became a friend and great inspiration to him.  Although Ryan’s paintings ranged from representational figures to Cézanne-inspired landscapes, geometric abstractions characterized his mature work. ”Ryan was a good friend of Fuller’s,” Sandra Miller said. ”He took on a lot of Fuller’s ideas and theories, such as how strength is created by certain geometric formations, and built examples of these principles as teaching aids for his students.”  Ryan helped build one of the first geodesic dome homes in Oregon, outside Eugene. Seven hundred of Ryan’s structural models based on Fuller designs were donated by the artist to the Buckminster Fuller Collection at the University of Illinois, Champaign Campus. 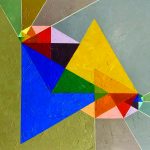