Carson Ellis is an internationally recognized author and illustrator of the bestselling picture books Home and Du Iz Tak? (a Caldecott Honor book and the recipient of an E.B. White Read Aloud Award). She has illustrated a number of books for children including bestsellers The Mysterious Benedict Society by Trenton Lee Stewart, The Composer Is Dead by Lemony Snicket, and The Wildwood Chronicles by Colin Melloy, also Ellis’s husband, for whose Portland-based band, The Decemberists, Ellis is illustrator-in-residence; her striking album designs for The Decembrists won her Grammy nominations in 2016 and 2018. Her editorial illustrations have appeared in The New Yorker, The New York Times, and Poetry Magazine, among many others. Her artwork is represented by Nationale in Portland.

When asked how to break into illustration, Ellis responded:  “Any tips I have for recent graduates probably won’t put them on a fast track to illustration success but here are a few: Draw all the time. Prioritize making beautiful art over making money. Keep your overhead low and live simply.” 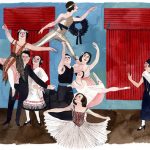 Serafina Astafieva and Her Cabaret