Betty LaDuke (1933-) is a painter, muralist, printmaker and writer.  Born in the Bronx, New York, to Jewish parents Sam and Helen Bernstein, LaDuke knew she would be an artist by the time she was nine. At age sixteen, she enrolled in the High School of Music and Art in New York, and continued her education at Denver University, the Cleveland Institute of Art, and the Instituto Allende in Mexico. In 1963, she graduated from California State University in Los Angeles with master’s degree in printmaking. LaDuke taught at Southern Oregon University from 1964 to 1996, the university’s second woman art teacher and, for eighteen years, the only woman in the Art Department. In an effort to raise the profile of women and international artists, she initiated “Women and Art” and “Art in the Third World” courses at the university. Her exhibitions highlighted these themes, including one at Willamette in 1977, Landscape: A Feminine Mythical View. LaDuke also published a series of books documenting the art of non-European women, including Compañeros, Women, Art, and Social Change in Latin America (1985) and Africa: Women’s Art, Women’s Lives (1991). From 1975 through the 1980s, LaDuke devoted her research to exploring world art and documenting the experiences of women in Asia, Africa, and Latin America. Her extensive travels allowed her to develop a series of sketchbooks that formed the basis for the images in her larger works and exhibitions. She was commissioned by the Mexican government in the 1950s to paint the outer walls of one-room schoolhouses; she was awarded the commission to create the 100-foot-high mural sequence Dreaming Cows (2009) for Heifer International (Little Rock, AK) whose mission is to end world hunger and poverty.  LaDuke is the recipient of the Oregon Governor’s Award in the Arts (1993) and the National Art Education Association’s Ziegfield Award for distinguished international leadership (1996). LaDuke is the mother of Winona LaDuke, a Native American writer, activist, and environmentalist. Winona’s father, Vincent (Sun Bear) LaDuke, enrolled Betty LaDuke as a member in his White Earth tribe.

“I am an artist with pen and sketchbook for shovel and earth. My seeds are the sketches I create of agricultural workers at farms, orchards and vineyards as they plow, prune, weed or harvest our food. From field to studio, my sketches are the root of my artwork, that gradually evolve in the form of shaped, routed and painted wood panels. These four or five foot tall mural panels become the workers, men and women, bending, stooping or stretching to harvest our foods. I am grateful for my community’s support of public art that honors workers by making their contributions visible.”—Betty LaDuke 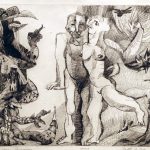 And in the Beginning 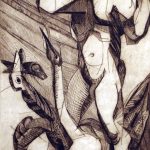 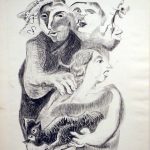 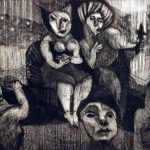 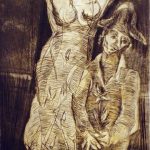 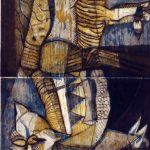 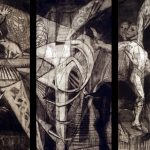