Ben Buswell (1974- ) received his MFA from the University of Wisconsin (Madison) and BFA from Oregon State University.  He is a Hallie Ford Fellow in the Visual Arts and a two-time recipient of the Career Opportunity Grant from the Oregon Arts Commission and Ford Family Foundation.  His work has been included in two Oregon Biennials (Disjecta, Portland Art Museum) and he has had notable solo exhibitions at Samuel Freeman Gallery (Los Angeles), CoCa (Seattle), The Art Gym (Lake Oswego) and TILT (Portland).  He is represented by Upfor Gallery in Portland.  His work is in the collection of the Portland Art Museum, Western Oregon University, the University of Oregon and Oregon Health and Sciences University.  He is Art Department co-chair at Rock Creek, where he teaches sculpture.

Buswell’s work is concerned with ideation, materiality and the subversion of the image. 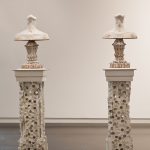 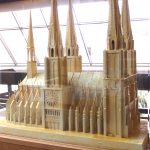