Barbara Grossman studied at Yale, The Akademie Der Künste (Munich) and received her BFA from Cooper Union.  Her long career has included solo and group exhibitions throughout the east coast, including Five Points Gallery (CT), Media Loft Gallery (NY), Gross McCleaf Gallery (PA), University of Tulsa (OK), The New York Studio School (NY) and Washington and Lee University (VA).  Her longest affiliation was with the Bowery Gallery (NY) an artists’ cooperative of which she was a founding member, and where she has exhibited since 1973.  Her work is in numerous public collections including the Corcoran Museum of Art (DC), Hood Museum of Art, Dartmouth (VT), The Housatonic Museum of American Art (CT), The National Academy Museum (NY) and Wright State University (OH).  She has taught at the New York Studio School, Yale, Brandeis University, Brooklyn College, Chatauqua School of Art, Mt. Gretna School of Art, Darmouth College, Boston University, Colby College and Vermont Studio Center. She is a recipient of a Fulbright/Hayes grant, a grant from the Connecticut Commission of the Arts, and an Ingram Merrill Foundation grant. She has received three purchase prizes from The National Academy (NY).  Rock Creek is the only public collection on the west coast to own one of her paintings.

Grossman paints exclusively women, cats and dogs arranged languidly in interior spaces filled with richly patterned furniture, tables and rugs.  But we are not in House Beautiful but rather the formal realm of abstract expressionism, which was the context of her education as a painter.  These interiors and figures are imagined, not painted from models and props. She writes:  ”the interaction of color and space is my subject…. The figures create their own space and are defined by it. The color both participates in this as well as generates it. It is characteristically bright and luminous.”  Grossman lives and works in New York.  She was married to the painter Charles Cajori (1921-2013). 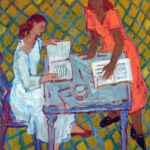