The Campaign for Opportunity co-chairs and donors 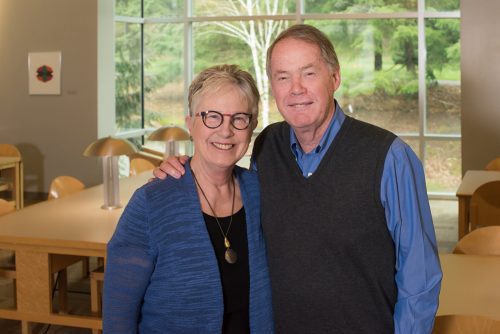 “Philanthropy and PCC is a powerful combination. It changes lives. It builds our community.” Tom Neilsen, The Campaign for Opportunity co-chair and donor

As longtime PCC supporters and co-chairs of the PCC Foundation’s Campaign for Opportunity, Chris and Tom Neilsen’s generous investment in scholarships profoundly impacts the lives of PCC students, year after year.

Lifelong Pacific Northwest residents, both Chris and Tom are graduates of Oregon universities. Chris received an MSW from Portland State University, working as an educator before becoming a therapist and mediator. Tom received an MBA from Willamette University, and for many years was owner and CEO of the family manufacturing business in Salem.

Chris and Tom have extensive volunteer experience. When they moved to Portland in 2007, they became involved with PCC as volunteers and donors. Chris served on the PCC Foundation Board of Directors from 2010 to 2015, including a term as president.

For Chris and Tom, it’s the broad scope of PCC’s positive impact in the community that has led them to continually deepen their support. The Neilsens have provided one of the campaign’s first gifts – a $280,000 flexible endowment for student scholarships funded through a multi-year commitment of mandatory IRA distributions.

“Every student story is an inspiration. Both of us are humbled by the persistence and desire of PCC students to make their lives better,” Chris said. “We are proud to support them in accomplishing their dreams.”