This content was published: April 6, 2015. Phone numbers, email addresses, and other information may have changed.

What’s going on in the world of LMSs?

When you are busy teaching online or supporting online teaching, you might not have time to look up from your work and see what’s going on in the world of Learning Management Systems. As PCC approaches the fifth anniversary of its adoption of Desire2Learn, we should be mindful of what’s going on in the larger world of LMSs. After all, what might seem permanent and fixed today could very well change tomorrow, so it’s good to know the landscape.

In September 2014, a group of ed-tech hobbyists published a study on their site, called edutechnica, that tracked the rates of adoption for the various LMSs at higher-ed institutions. Their study identified the following trends in LMS use and adoption: 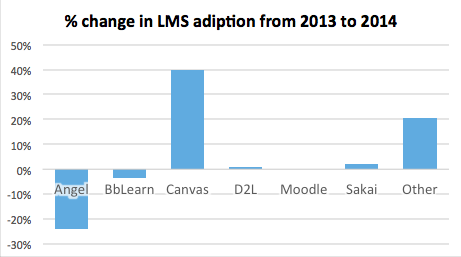 Data from edutechnica.com, used under CC BY

After PSU and PCC adopted Desire2Learn in 2009 and 2010, respectively, I thought we’d see many other colleges and universities in the Northwest flocking to D2L. But it hasn’t happened. Instead many institutions of higher ed have adopted a new LMS called Canvas. Momentum has been surprisingly steady:
When I talk with colleagues at other colleges in the Northwest, I keep hearing about Canvas. Since I’m a fast learner, I asked myself, after I’d heard about Canvas for the 53rd time, What the heck is up with Canvas??
Canvas, a relative newcomer to the LMS scene in 2011, was created by a privately held company (D2L is also privately held) called Instructure, based in Salt Lake City. You can read about the history of the company and the LMS on the Instructure web site, but the synopsis is that a company started in 2008 by two grad students now employs over 550 people and serves over 1200 colleges, universities, and school districts. Adoption of Canvas jumped from around 200 in 2014 to over 400 in the spring of 2015. The company now wants to move into the corporate-training market, having launched a training management system called Bridge. Both Canvas and Bridge employ a sleek design with a Cloud-based architecture that makes them reliable and fast – or so says the company’s literature. Certainly our peers at other colleges in the Northwest are finding a lot to like about Canvas. The University of Oregon recently adopted Canvas after faculty and students voted overwhelmingly for it.
In summary, Canvas is one LMS to keep an eye on. And what about LMSs generally? Jim Groom, whom I had the honor of meeting at the Portland NWACC conference a couple years ago, wrote an article with Brian Lamb in 2014 that should be required reading for everyone who teaches online. Their article, called “Reclaiming Innovation,” was published by Educause and challenges us all to think about the ways in which the tools we use promote – and detract from – student learning. Why, the authors ask, is all student work housed within the LMS, invisible to the public and unavailable to students once the course is over? Part of the article, called “Five arguments against the learning management system,” challenges us to think about systems, silos, missed opportunities, costs, and confidence, as they relate to student learning. Also the article is just beautiful to behold, published in a gorgeous font, with embedded tweets and videos. It shows us how well the web can really work – perhaps to reinforce their point about why we should be disappointed in LMSs generally.
No one is saying that the LMS is going away anytime soon, but still it’s good to keep an eye on developments in the world of LMSs. It’s a world that’s constantly evolving, even if we don’t notice right away.

x by Cynthia G 7 years ago

Interesting! Thanks for posting this information.

x by Erin 7 years ago

As a current student taking classes from two separate colleges, PCC and Concordia, using two different LMS platforms, D2L and Blackboard, I would have to say that I prefer Blackboard and wish that PCC would go back.

I have never heard of Canvas, even last week when I was talking to a colleague at OSU we only talked about Blackboard and Moodle, Canvas never came up in the conversation.

In my experience as a student Blackboard is much more user friendly, especially to mobile devices. At first I found the D2L user interface to be a lot less intimidating, however after a year of school I find Blackboard is much less frustrating.

I would love to get a look at Canvas to see what the differences are. I think a major consideration should be how each works on mobile devices, such as smartphones and tablets. Additionally, it would be helpful if PCC’s LMS would link with Google so that you could use the Google Apps that all students already have to upload homework assignments.

x by Jennifer 7 years ago

I have used all of the above LMSs and Canvas is my favorite. It’s “light” where D2L has TOO many options and places for an instructor to get lost. D2L does have some nice features like changing dates and bulk editing, though.

Canvas looks cleaner and is easy to navigate. Grading and Discussions are nice to use. Blackboard needed to many button clicks to get anything done. D2L is certainly better, but Canvas is even better. A lot of D2L has hidden “things” using dropdown menus (more button clicks) and with Canvas it’s all right in front of you. Make a big mistake in your course and need to delete everything? Reset the course with a click of a button.

I by no means hate D2L, but from a “political” standpoint, Canvas is like a sleek Mac and D2L/everything else is the clunky PC. :)

x by Debra Lippoldt 7 years ago

Thanks so much for sharing. I especially appreciate reading the “Reclaiming Innovation” article. So much I am learning about teaching online just the nuts and bolts of managing the system and this article reminds me of the bigger picture. Very challenging in good ways.
Thank you.

x by Usha patel 7 years ago

I am new to the online course experience. Though I have used D2L for my face to face class that I am teaching at PCC. It is helpful to keep the students aware about their grades. Can give some online quizzes too.