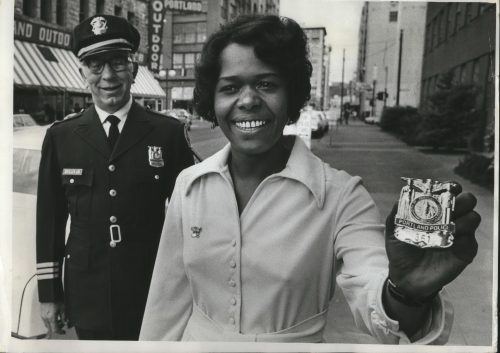 Photo courtesy of the Oregonian. Carmen Sylvester being sworn in as the first African American woman on patrol with the Portland Police Bureau, 1974.

The Carmen M. Sylvester Criminal Justice Scholarship at PCC was named to honor Carmen Sylvester’s courage in blazing a trail with Portland Police Bureau, both as an African American and a woman who joined a traditionally male-dominated field. It reflects her belief that the best officers are those who, like many PCC students, have real life experiences and who are committed to helping their communities. All students who are majoring in Criminal Justice, have completed the required diversity and anti-bias course as well as completed 24 credits in the program and have financial need are eligible for the scholarship.

What does law enforcement need today? Sylvester believes there are two broad categories: First, Oregonians need to understand this state’s history. The anger and protests are not just about recent events, but instead reflect 400 years of history and a lot of unresolved injustices. Sylvester recalls being profiled as a shoplifter at a local store, and being redlined for a home improvement loan. Next, we need good people “with real life experiences” in law enforcement. According to Carmen, being a police officer is not just about investigating crime; it’s about being a civil servant and helping people, often during their darkest hours.

About Carmen Sylvester
Carmen Maria Sylvester was the first African American woman hired by the Portland Police Bureau, and was one of the first five women to work patrol. She was sworn into service in 1974. Facing resistance, racism and sexism, Sylvester’s path would challenge anyone. Sylvester’s response? “I just told them I wasn’t going anywhere. I had babies to take care of, and I made clear to them that they couldn’t embarrass me or force me out.” Sylvester raised four daughters and is a proud PCC alumna. She believes that the best police officers are people who have had actual life experiences. “It helps, when dealing with members of the public, to know what it feels like to have a past-due utility bill,” she said.

You Can Support Future Scholarships
A donation to this fund will help to create scholarships for criminal justice students committed to supporting diversity in the criminal justice system. The Zusman family raised $5,000 initially, the fund quickly took off and by January 2021, the fund has raised more than $70,000. The goal is to raise $100,000 for this scholarship with the community’s support. When asked what inspired their vision for this scholarship, they said, “This is a positive way to help support the next generation, to improve our criminal justice system, and to begin to heal the wounds of the past.”

For questions about this scholarship or to make a donation over the phone, please contact the PCC Foundation at 971-722-4382 or pccfoundation@pcc.edu.